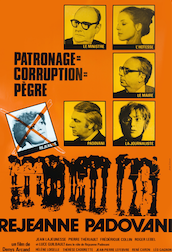 
Peeling back the layers of civic decay


OK, today (July 1) is Canada Day. In 1974, when the national holiday was still known as Dominion Day, the celebrations were held during the last week of a federal election. On July 8, Pierre Trudeau’s governing Liberal party went from a minority to a majority in Canada’s House of Commons. To the best on my recollection, film policy was not an issue in the campaign. Support for the struggling domestic industry was neither mentioned in finance minister John Turner’s pre-election budget speech on May 7, nor his post-election speech on November 18. On that day, though, the government increased its Capital Cost Allowance for films from 60 to 100 per cent. Under the new rules investors could deduct from their taxable income 100 per cent of the dollars they put into domestic productions. A Canadian Audio-Visual Certification Office (CAVCO) was created to administer the CCA, and the result was the “tax shelter era” of Canadian filmmaking. Eight years of excitement, controversy and disappointment followed. In the positive spirit of the day, though, we’ll stay with 1974, and recall four of the Canadian features that opened in Vancouver during a year in which the most popular baby names in the U.S. were Michael and Jennifer. Today’s additions to the Reeling Back archive (with links to each following the Afterword to this posting) include writer-director Denys Arcand’s award-winning political corruption drama Rejeanne Padovani

REJEANNE PADOVANI. Co-written by Jacques Benoît. Music by Walter Boudreau. Written and directed by Denys Arcand. Running time: 96 Minutes. Mature entertainment in French with English subtitles. IF ANY PROOF IS still needed of the incredible vitality of moviemaking in Québec, it is provided by Rejeanne Padovani, a stunning film about political corruption in la belle province. An effective blend of The Godfather and Z, its arrival here on the West Coast is long overdue.
Made more than a year ago [1972], it has been shown in film festivals as far away as Beirut, and as close as San Francisco. In between, this well-travelled Montreal movie has been shown in London, New York, Paris, Cannes and Stratford.
Rejeanne Padovani is the original creation of director Denys Arcand. Although it is his fourth feature film, it’s the first one to be shown commercially west of Ontario.
Part of the reason is that all of the 33-year-old Quebecer’s pictures have been made in French. Another part is the fact that two of them were made for the National Film Board.
One, On est au coton, was a two-hour long exposé of working conditions in the Québec textile industry. Made in 1970, it was suppressed and has never been released.
The other, Québec: Duplessis et après, doesn't seem to be available in either an English-language or English-subtitled version. Arcand stopped making films for the NFB in 1972.
That year he directed La Maudite Galette (Dirty Money), the story of a poor plumber willing to kill his rich uncle for the older man's fortune. Making her film debut as the plumber's nagging wife was Luce Guilbault, a talented stage actress now playing the title role in his Rejeanne Padovani.
Running through all four films are strong currents of political disenchantment, expressed through stories both fictional and documentary of people who have been abused by the powerful. Power,  Arcand asserts in reiteration of the old adage, corrupts.
Rejeanne is the estranged wife of paving contractor Vincent Padovani (Jean Lajeunesse). Four years earlier, she left her husband for a younger man, distillery heir Lennie Tannenbaum (Stan Gibbon). Now she wants to return.
The action of the film all takes place on a single evening and morning. Padovani is giving a private dinner to celebrate the opening of a new superhighway,  the "St. Lawrence Autoroute."
Among his  guests  are provincial highways minister Georges Bouchard, (Jean-Leo Gagnon), the minister's ambitious confidential secretary Jean-Pierre Caron (Jean-Pierre Lefebvre), Montreal mayor Jean-Guy Biron (René Caron) Padovani's legal adviser Jean-Leon Desaulniers (Roger Lebel), their wives and various bodyguards.
When released in Montreal last October [1973], the film caused a not-unexpected sensation. The characters in Arcand’s drama are a hairsbreadth away from being libellous, and few politically aware members of the audience failed to recognize their real-life counterparts.
Adding power to their portrayals is the fact that he has adopted a hard, astringent visual style similar to that of Constantin Costa-Gavras, a style that emphasizes stark, striking compositions and minimum camera movement. For Canadians, Arcand's film should rival the Greek director's 1969 feature Z both in its impact and contemporary relevance.
While Padovani's guests are partying, a number of situations must be resolved. One is the question of the press. Reporter Louise Thibaudeau (Paule Baillargeon) has caught the scent of scandal in the multi-million-dollar project’s cost over-runs.
Another involves the public. A community activist group is planning to picket the opening ceremonies and distribute leaflets questioning Mayor Biron’s honesty.
And, finally, there is the question of Rejeanne. "I don't want speak English any more," she tells Dominique (Pierre Thériault), her husband's tough right-hand man.
“I’m sick of living in the States." She begs to see her children.
All questions, of course, will be resolved by the morning. Money will be paid, scores will be settled and, where necessary, bodies will be buried. Most important, though, nothing will disturb Padovani's party.
While his guests are enjoying themselves, their hirelings — managers, secretaries, executive assistants and peace officers — protect the bosses from worldly care. Arcand, who co-authored the screenplay with Jacques Benoît, peels back the layers of decay one by one, finally exposing a hard core of evil that is, like the story of The Godfather, both frightening and fascinating.

Afterword: Rejeanne Padovani introduced English Canadian audiences to a Québécois director who combined a social conscience with a quick wit and dramatic flair. In 1987, his fourth fictional feature Le déclin de l’empire américaine (The Decline of the American Empire) became the first Canadian feature nominated for a U.S. Academy Award in the foreign language film category. (It lost to Dutch director Fons Rademakers' The Assault, a story of Second World War resistance fighters.) Its 2003 sequel, Les invasions barbares (The Barbarian Invasions), earned Arcand an Oscar nomination for his original screenplay, and won the foreign language film Academy Award.
Though Hollywood beckoned, Arcand resisted the call. It’s hard to imagine a film such as his 1989 take on Christian Scripture, Jésus d Montréal, being greenlit by a corporate studio. When he did direct his first English-language feature, 1993’s Love and Human Remains, it was based on a play by Edmonton-born “bad boy of Canadian Theatre” Brad Fraser. Active to this day, he continues to challenge critical expectations with his 2018 feature La chute de l’empire américaine (The Fall of the American Empire), a tale of crime and moral choice set in modern Montreal, a picture that just went into general release.