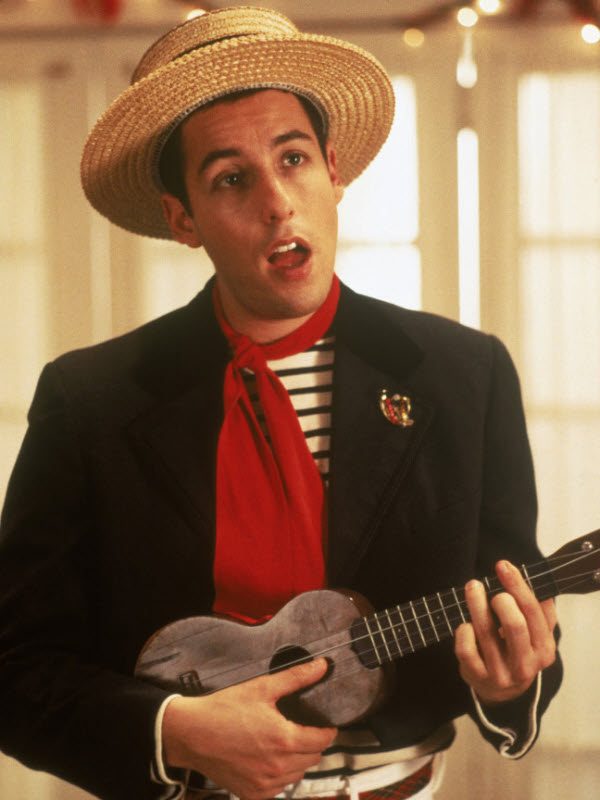 Louie Capshaw (Adam Sandler) may be the most annoying of the Mixed Nuts on view in writer-director Nora Ephron's Christmas comedy.


Holiday countdown begins with a bowlful


On the 11th day before Christmas, my TV gave to me . . . And so it begins, a list of movies, checked over twice, containing titles both not-my-cup-of-tea and nice. I've chosen an even dozen from the pool of productions endlessly rebroadcast during our ever longer Yuletide. Today (Dec. 14), in keeping with the mood of mild desperation a mere 11 shopping days before the year's great gift exchange, Reeling Back unwraps 1994's Mixed Nuts. Before moving on to the review, though, I'm going to take time out for a small rant. Although I don't buy any of the "war on Christmas" nonsense peddled by the Fox and Sun news networks, I do regret the front-loading of the season at the expense of the traditional 12 Days of Christmas. The modern mercantile version of the season-to-be-jolly has repositioned December 25, making what was once the First Day of Christmas, the last. Thereafter, it's on to the "after-Christmas" sales. What's been lost is the winter solstice moment, the midwinter festival that recognized the rebirth of the land to come after the year's longest night. It lasted until Twelfth Night (Jan. 5) and made good sense regardless of your religious beliefs. It also came closer to my idea of a merry Christmas.

Wednesday, December 21, 1994.
MIXED NUTS. Co-written by Delia Ephron. Based on the original screenplay Le Pere Noel est une ordure. Music by George Fenton. Co-written and directed by Nora Ephron. Running time: 97 minutes. Mature entertainment with the warning "occasional coarse and suggestive language." ADD TO THE YEAR-end lame list Mixed Nuts, Nora Ephron's leaden attempt at holiday humour. Looking a lot like the pilot for a TV sitcom, her picture is the cinematic equivalent of sour eggnog.
She means well. A lady of wit and considerable sophistication, the writer-director of Sleepless in Seattle (1993) has demonstrated a wonderful way with modern romance.
Unfortunately, Mixed Nuts, her slap-happy tale of Christmas Eve crises at a Los Angeles suicide-prevention centre, is just a mess. It's not even her idea.
Ephron borrowed the concept from a French-language film called Le Pere Noel est une ordure (1982), for which the very polite translation is "Santa Claus is a turkey." Served up with cranberries, in her version, is Steve Martin.
As Philip, he is the blundering director of Lifesavers, a free-enterprise social-service agency. Doleful Philip is thrown into a funk when his landlord, sleazy Stanley Tannenbaum (Garry Shandling), presents him with an eviction notice on December 24.
He feels responsible for his two employees — emotionally dependent, empathetic Catherine O'Shaughnessey (Rita Wilson) and widowed know-it-all Blanche Munchnik (Madeline Kahn).
Providing faux comic complications are a despondent cross-dresser (Liev Schreiber), a single-mom-to-be (Juliette Lewis), her would-be artist boyfriend (Anthony LaPaglia) and a lovelorn, sexually ambiguous songwriter (Adam Sandler).
A mechanical, transparently manipulative and generally forgettable farce, Ephron's by-the-numbers feature figured in a terrible nightmare I had last night. It was prompted by something I remember her saying in a recent interview.
Ephron expressed the hope that Mixed Nuts "would be on television forever at Christmastime." In my bad dream, Scrooge's Ghost of Christmas Future showed me Ted Rogers getting together with Ted Turner to create CCN — the Cable Christmas Network, a 24-hour specialty channel providing seasonally-themed entertainment from U.S. Thanksgiving through New Years Eve.
And there was Mixed Nuts, the biggest, least funny ornament on that tinsel-coated tannenbaum from hell.

Afterword: Though it was his fifth feature film, Mixed Nuts was the first time that Adam Sandler actually impinged upon my consciousness. Mercifully, I'd missed his first two, while his third (1993's Coneheads) and fourth (1994's Airheads) did not focus on his character. Here, playing the talent-challenged singer Louie Capshaw, he stands out among the movie's grotesques. Irritating as a bug bite, the Sandler persona would became a test of one's comic tolerance. The Saturday Night Live alumnus reminded me of Jerry Lewis (the comedian that Tom Lehrer once suggested was in charge of "National Make Fun of the Handicapped Week"). Critics either loved him or (mostly) hated him. Regardless, his gift for gormlessness and his portrayals of the socially retarded — a so-called "man-child" — have made him a multi-millionaire power player in Hollywood. Sandler's fans make the perfectly valid point that his movies play to huge audiences and, if you don't find chronic flatulence funny, don't go. Over time, I've become less appalled by the man's movies and more saddened that someone of obvious intelligence — he has a degree in fine arts from NYU — chooses to live by H.L. Mencken's cynical observation that "nobody ever went broke underestimating the intelligence of the American public."