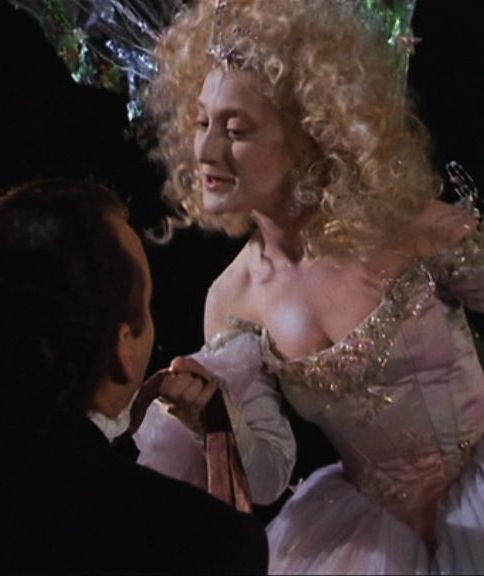 
Scaring the Dickens out of a Scrooge


On the second day before Christmas, my TV gave to me . . . Continuing our list of a dozen movies from the pool of productions endlessly rebroadcast during our ever longer Yuletide. Today (Dec. 23), maintaining the Gremlins mood of magical mayhem, Reeling Back recalls an executive-suite take on A Christmas Carol, 1988's Scrooged. You may wish to click the Read More button now, though, as I'm going to take time out to repeat my holiday rant. Although I don't buy any of the "war on Christmas" nonsense peddled by the Fox and Sun news networks, I do regret the front-loading of the season at the expense of the traditional 12 Days of Christmas. The modern mercantile version of the season-to-be-jolly has repositioned December 25, making what was once the First Day of Christmas, the last. Thereafter, it's on to the "after-Christmas" sales. What's been lost is the winter solstice moment, that midwinter festival recognizing the rebirth of the land that comes after the year's longest night. It lasts until Twelfth Night (Jan. 5) and makes good sense regardless of your religious beliefs. It also comes closer to my idea of a merry Christmas.

THE NIGHT THE REINDEER Died looks like fun. A made-for-TV movie, its promotional  ad shows us Six Million Dollar Man Lee Majors coming to the aid of Santa Claus when the jolly old elf's North Pole toy shop is attacked by terrorists.
Scrooge, a live TV adaptation of Dickens's A Christmas Carol, has potential. Introduced by John Houseman, it's a variety show version of the Yuletide tale, offering Buddy Hackett in the role of Ebenezer Scrooge and Mary Lou Retton as the irrepressible Tiny Tim.
Even something like Robert Goulet's Down Home Cajun Christmas could fly. As a concert, it comes close to our own CTV network's idea of Canadian culture.
These shows, though, are on the holiday schedule of New York's IBC-TV. They're the brainchildren of Frank Cross (Bill Murray), the youngest network president in the medium's history. Any one of these, sad to say, would make a better evening's entertainment than Scrooged.
A comedic adaptation of the aforementioned Dickens classic, Scrooged was "conceptualized" by producer Art (The Untouchables) Linson. As a rule, one should be wary of anything "conceptualized," but the essential idea — a miserly media mogul gets spooked on Christmas Eve — seemed straightforward enough.
Besides, I'm always willing to relax the rules for Richard Donner. A director responsible for pictures both awesome (the original 1976 The Omen, 1978's Superman, 1987's Lethal Weapon) and awful (1985's Ladyhawke and 1982's The Toy), Donner is capable of anything.
Bill Murray is more problematic. In supporting roles (Dustin Hoffman's roommate in 1982's Tootsie, for example), he can be a real treat.
In ensemble pieces (1984's Ghostbusters; 1981's Stripes), he can be terrific. What Murray can't do, though, is carry a movie on his own.
In Scrooged, Donner asks him to do just that. The results are anything but pretty.
Nor are they particularly funny, a fault that lies in the generally unpleasant screenplay. Either writers Mitch Glazer and Michael O'Donoghue were unclear on the original "conceptualization," or they're suffering from Big Apple worm-rot.
Instead of a man diminished by greed, they suggest that Cross never was particularly human to begin with. "A garden slug gets more out of life than you," snarls his Christmas Past ghost, a New York cab driver (David Johansen).
The point of Dickens's ghosts are to show us the decent man who once was, and rekindle in him the spark of goodness. Donner's haunts, unfortunately, are working with a hollow suit. They scare up little more than a few cheap laughs.
Faring best in that department is Sugarplum (Carol Kane), the picture's pixie-like Ghost of Christmas Present. Done up in toe shoes and cellophane wings, she is a fairy who makes her entrance to the "The Ballbreaker Suite."
Sweetly, she gives her best Billie-Burke-as-Glinda-the-Good imitation. Sweetly, ever so sweetly, she proceeds to beat the bejeezus out of Francis Xavier Cross. A welcome touch of  sugar in a generally sour film, Kane is one of Scrooged's few real delights.

Afterword: Deeply concerned about poverty and injustice in Victorian England, Charles Dickens wrote his 1843 novella A Christmas Carol to sound the call for social reform. It made an immediate impact in its own day, becoming a major influence in the restoration of traditional seasonal practices in newly industrialized Britain. It is the orginal source of the greeting "Merry Christmas" (as well as the response, "bah, humbug!"). Today, after the gospel of Luke, it's the world's best known Christmas story, a part of the popular culture that has been adapted to stage and screen, opera, ballet, comic books and video games. The bare bones elements of the tale — holiday haunts reminding a soul in distress of life's "true meaning" — have inspired more TV-series Christmas episodes than anyone has cared to count. Indeed, broadcasting seems to have an endless supply of Frank Crosses, each one demanding that their underlings "play it again, Scrooge."