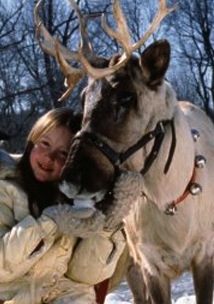 In her heart, farmer's daughter Jessie Riggs (Rebecca Harrell) knows that the injured reindeer she's tending is Santa's own Prancer.


On the sixth day before Christmas, my TV gave to me . . . Continuing with a list of movies, checked over twice, containing titles both not-my-cup-of-tea and nice. I've chosen an even dozen from the pool of productions endlessly rebroadcast during our ever longer Yuletide. Today (Dec. 19), following along from the big-budget fantasy Santa Claus, we recall 1989's Prancer, a little film with endless heart. You may wish to click the Read More button now, though, as I'm going to take time out to repeat my holiday rant. Although I don't buy any of the "war on Christmas" nonsense peddled by the Fox and Sun news networks, I do regret the front-loading of the season at the expense of the traditional 12 Days of Christmas. The modern mercantile version of the season-to-be-jolly has repositioned December 25, making what was once the First Day of Christmas, the last. Thereafter, it's on to the "after-Christmas" sales. What's been lost is the winter solstice moment, that midwinter festival recognizing the rebirth of the land that comes after the year's longest night. It lasts until Twelfth Night (Jan. 5) and makes good sense regardless of your religious beliefs. It also comes closer to my idea of a merry Christmas.

Friday, November 17, 1989
PRANCER. Written by Greg Taylor. Music by Maurice Jarre. Directed by John Hancock. Running time: 103 minutes. General entertainment.
No Santa Claus! Thank God, he lives, and he lives forever. A thousand years from now, Virginia, nay, ten times ten thousand years from now, he will continue to make glad the heart of childhood.
— from Is There a Santa Claus? (1897)

SHE BELIEVES.  Sitting in the shed on the other side of the frozen pond, eight-year-old Jessica Riggs (Rebecca Harrell) reads aloud from her big, red book and remembers how her mother used to read to her. Her favourite passage is from F.P. Church's famous 1897 New York Sun editorial. Like little Virginia O'Hanlon, Jessie believes in goodness, in the power of love and the spirit of Christmas.
Most of all, though, she believes that the injured reindeer that she's tending is Santa's own Prancer. She's had a sign.
On the day of her school's Christmas concert, she saw town workers hanging the traditional life-sized effigies of St. Nick, his sleigh and its reindeer team over Main Street. Suddenly, the third one along broke loose from the rigging. "It's Prancer," she said as it smashed down on the snowy road.
Later, encountering a live deer in the woods near the Riggs Fruit Farm, she knows at once who he is. When, on their second meeting, she notices that the deer is injured, Jessie knows just what she has to do.
Thank goodness, it's still possible. Even in an age of Bat-hype and megabluster, little movies can come out of nowhere and grab us by the heart.
A timeless tale destined for annual revivals, director John Hancock's Prancer is such a film. Its elements are classic — faith; a little girl estranged from her widowed father; Christmas; a small town in middle America; hard times.
"Dad?'' says Jessie, seeing that family farmer John Riggs (Sam Elliott) is trying to sell his tractor. "Are we poor?"
"No," he answers. "We're just down on our luck."
In less steady hands, such elements can turn into mawkish cliches. Recent attempts to create yuletide "classics" — Santa Claus: The Movie (1985); One Magic Christmas (1985);  Scrooged (1988) — have ranged from embarrassing to disastrous.
Hancock's Prancer is, by contrast, a triumph of emotional honesty, a picture that stimulates the tear ducts without offending our intelligence. Filmed around the director's own hometown of LaPorte, Indiana, and Three Oaks, Michigan, it plays all the right notes.
Manipulative — and what Christmas movie isn't? — in a wonderfully positive way, Prancer makes glad the heart of childhood, offering the finest seasonal entertainment since 1983's A Christmas Story.

Afterword: In many cases asking "whatever happened to" a particular child actor is an invitation to disappointment. Consider Home Alone star Macaulay Culkin. A mildly annoying kid, he starred in 13 feature films before he was 13 years old. A mostly uninteresting adult, he's remembered for a 2004 drug arrest and his sleepovers with the late Michael Jackson. Now consider Rebecca Harrell, who made such a positive impression in Prancer. She would make appearances in four more theatrical features and a made-for-TV movie, all of them low-budget independent pictures. She might have have become another exploitation movie "scream queen" — in the made-in-Vancouver TV feature Saint Sinner (2002), she stars as a homicidal succubus — but for a strong sense of personal responsibility that drew her to the environmental movement. In 2010, she married author and activist Josh Tickell. Together, they have produced and directed the documentaries Freedom (2011), about the role of biofuels in American energy self-sufficiency,  and The Big Fix (2012), an investigative report on the BP oil spill in the Gulf of Mexico. Now known as Rebecca Harrell Tickell, she shared her story in a July 2011, TED Talk that she presented in the form of a poem. The star of Home Alone made a lot of money. The star of Prancer is making a difference.