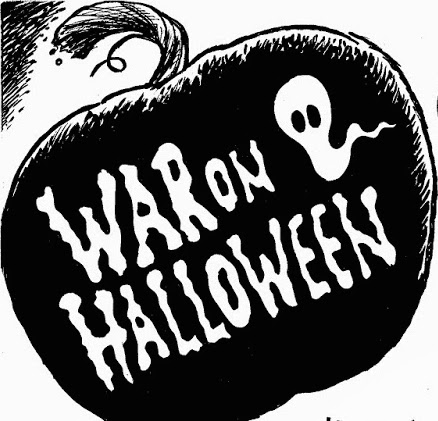 THE WHOLE STORY — To see a complete list of the more than 720 items currently posted to Reeling Back, visit the FULL SITE INDEX. To locate specific names or subjects, type your key word(s) into the Search box (located in the right-hand corner of the nameplate above), and click on the magnifying glass (search) symbol. The archive grows almost daily, so feel free to explore.


It used to be so simple. One night a year, kids went around the neighbourhood in homemade costumes collecting treats. Who knew that in 2016 Hallowe’en would be a multibillion-dollar industry, a seasonal event increasingly mired in social contradictions and political controversy?

I suppose it was inevitable. As the non-statutory Hallowe'en holiday grew into a week-long celebration of the cheerfully macabre, societal tensions have grown along with it. All Hallows' Eve has became its own season, a scrappy rival to Christmas in the pop culture, and just as issue-hungry TV chat show hosts once ginned up a “war on Christmas,” they’ve now discovered a “war on halloween.”

The annual autumnal festival, projected to generate some $8.4 billion in U.S. retail spending this year, is currently caught in the crossfire between Christian evangelicals, who argue that Hallowe’en promotes Satanic values, and the "politically correct," who object to costumes based on sexist, ethnic or racist stereotypes. As if that weren’t enough, 2016’s festivities coincide with a media focus on scary clowns.

Shock headlines — such as “‘Creepy Clown’ sightings: Why the Epidemic Is Spreading Across Canada” (Global News), “Creepy Clown Sightings Spread to Britain" (The Guardian) and “What Do the Scary Clowns Want?” (New York Times) — in otherwise reliable news sources suggest that there are a significant number of bad Jokers in the deck. And we know that this evening, a lot of Hallowe’en revellers will mark the occasion by going forth wearing masks base on 2016’s scariest clowns, presidential candidates Donald Trump and Hillary Clinton.

Come to think of it, this really is the year of the scary clown. TV news is infested with the likes of Britain’s Boris “BoJo” Johnson, Rudi “9-11! 9-11!” Giuliani, Newt “Contract on America” Gingrich and Anthony “Carlos Danger” Wiener to name just four. Gone forever are such gentle souls as Weary Willie, Bozo and Clarabell, and the traditional Hallowe’en may not be far behind.

Of course we’ll always have the movies with their impressions of the All Hallows' Eve that once was. To date the Reeling Back archive contains four films with key scenes set on October 31, a package that includes director Steven Spielberg’s E.T. the Extra-Terrestrial (1982) and Clint Eastwood’s A Perfect World (1993), Paul Donovan’s Canadian action-fantasy George's Island (1989) and Kenny Ortega’s Hollywood comedy Hocus Pocus (1993).

The yuletide’s relationship to Hallowe’en is made clear in Tim Burton’s animated musical The Nightmare Before Christmas (1993) and the season’s Mexican cousin, The Day of the Dead, is the setting of John Huston’s Under the Volcano (1984). The 10 most recent additions to the archive are:

LA VRAIE NATURE DE BERNADETTE —  A gifted director of screen comedy, writer-director Gilles Carle challenged accepted stereotypes in his 1972 feature examining attitudes towards women in Québec society. Micheline Lanctôt give an award-winning performance in the title role, playing a runaway wife seen as both a saint and a whore. (Posted October 30)

TOO OUTRAGEOUS ANIMATION — Respected for his eclectic International Tournee of Animation anthologies, cartoon packager Terry Thoren took a walk on the wild side in 1994, releasing this collection of shorts, 27 films designed to explore the boundaries of bad taste. (Posted October 28)

THE PUPPETOON MOVIE — Though producer-director George Pal is best known for his special effects features from the 1950s, this 1987 documentary celebrates his earlier “puppet cartoon” shorts. Included are 11 of his stop-motion animation films made between 1937 and 1947. (Posted September 30)

A CLOCKWORK ORANGE — Already a legend in the science-fiction community for his uncompromisingly intense 2001: A Space Odyssey (1968), director Stanley Kubrick followed up with this censorship-baiting 1972 adaptation of the Anthony Burgess novel. Darkly sardonic, it remains a timely critique of societal norms. (Posted September 30)

SCIENCE FICTION COMES OF AGE —  In a magazine feature previewing 1972’s second Vancouver S-F Convention, I examined the evidence that the genre was in transition from the margins to the cultural mainstream. The point would be driven home in an address by the event’s guest of honour, author Philip K. Dick. (Posted September 30)

EXPO 86: FINAL THOUGHTS — The 38th and final item in the Reeling Back series considered the fair’s legacy and the permanent movie houses that remained after the closure of the Canada, British Columbia and Expo Centre pavilions. (Posted September 27)