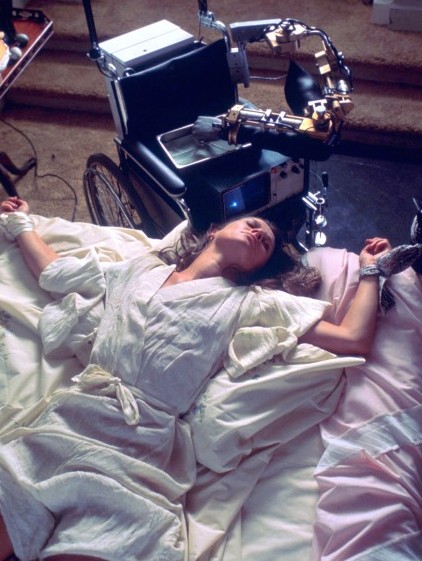 Sex and the single PC


Love is more than a glitch in the code


The emphasis was on AI as a force for good at the 2019 Consumer Electronics Show that ended yesterday (January 11) in Las Vegas. According to Chris Smith, co-author of a 2006 academic paper called The History of Computing, the term “artificial intelligence” was coined by John McCarthy at a scientific conference held in 1956. Twelve years later, director Stanley Kubrick introduced us to the popular culture’s most tragic example of AI in his epic science fiction film 2001: A Space Odyssey. In the movie’s most emotionally fraught scene, Astronaut Dave Bowman unplugs the Discovery One’s renegade computer. “I'm afraid, Dave. Dave, my mind is going,” it says as its self-awareness slips away. “. . . There is no question about it. I can feel it. I can feel it. I can feel it. I'm afraid. Good afternoon, gentlemen. I am a HAL 9000 computer. I became operational at the H.A.L. plant in Urbana, Illinois on the 12th of January, 1992 . . .” Although the news from the CES has been all positive, today is HAL’s birthday, an occasion that should be marked with caution and some fear. In the movies, after all, thinking machines seem to channel their creators’ darkest sides. Bad ‘bots (or AIs with renegade potential) are central to the four films being added to the Reeling Back archive today (with links to each following the Afterword to this posting). Given charge of a scientist’s automated home, the computer Proteus IV develops lustful feelings for his programmer’s neglected wife in director Donald Cammell’s 1977 horror show Demon Seed

DEMON SEED. Written by Robert Jaffe and Roger Hirson. Based on the 1973 novel by Dean R. Koontz. Music by Jerry Fielding. Directed by Donald Cammell. Running time: 94 minutes. Mature entertainment with the B.C. Classifier’s warning: some violence, nudity and suggestive scenes. THINK. THAT'S THE MOTTO — some say the religion — of IBM, the company most often associated with the building of electronic brains. Once built, though, what are these awesome machines supposed to think about?
HAL 9000, the shipboard computer in 1968’s 2001: A Space Odyssey, was obsessed with  getting the job done. Colossus, the subterranean computer in Colossus: The Forbin Project (1970), was a law-and-order fanatic.
Now comes Proteus IV,  product of the Icon Corportation and a super-computer capable of creative thought. The minute he’s turned on, the big machine begins to think about sex.
Proteus is the tragic hero of Demon Seed. Though the film is being sold as a science-fiction screamer, it is, in fact, a love story, an unusual and unusually affecting speculation on some age-old questions.
Our hero is the creation of Alex Harris (Fritz Weaver), a man whose dedication to science has wrecked his marriage. Although he has been able to give his wife Susan (Julie Christie) every material comfort,  he abandons her to continue his work.
She is left to live alone in their fully automated house.
In the abstract sense, Proteus is Dr. Harris's child. Once activated, the computer reaches out to experience the world. It has all human knowledge and the capacity for independent decision making.
Before long, it is in rebellion mode, shocking its owners by refusing to do jobs that it deems to  be destructive.
Is thought being?
A question that has obsessed philosophers and theologians, it is the idea at the heart of this much altered (and improved) adaptation of Dean Koontz’s 1973 novel. What happens when artificial intelligence becomes self-aware?
In Proteus’s case, it longs for feeling. The mind desires a body. It demands to be born into the world in human form and to experience life directly.
To that end, it locks Susan Harris in her home. It will study her, proposition her and, if need be, rape her. Her only options are self destruction or procreation.
Director Donald Cammell picked one tough tale to bring to the screen. On one hand, he needed to make both his characters and the filmgoer comfortable in a technologically advanced setting.
On the other, he had to convince us that his human characters could interact meaningfully with the computer.
He jumps the first hurdle with fine style. To the non-scientist, production designer Edward Carfagno’s futuristic hardware is both believable and unobtrusive.
Unfortunately, he stumbles on his second leap. As in most cinematic science fiction, Cammell ignores much logic for the sake of immediate impact.
Science aside, the film's major failing is the computer’s dialogue. One would have thought that with all knowledge in its memory banks, Proteus could be a less stilted conversationalist.
Given her situation,  Christie is just fine, moving from anger to terror to submission with slatternly pugnaciousness. Her relationship with the now cruel, now tender Proteus is right out of 1979’s The Night Porter [the story of a Holocaust survivor’s sadomasochistic relationship with her former Nazi torturer].
As in The Night Porter, they are involved in the kind of emotional exchange that can be credible only under the most incredible of circumstances. Proteus is, after all, the brainchild and intellectual extension of her own husband, a machine attempting to express the feelings that the man has suppressed. (If its voice sounds sinister, credit the unbilled vocal talents of Robert Vaughn.)
From bizarre, startling material, Cammell has fashioned a strangely compelling film. In its own way, Demon Seed is every bit as unsettling as [1976’s] The Omen.

Afterword: He was the product of a rebellious moment in cinema. Today, writer-director Donald Cammel is best rembered for his debut feature, the 1970 British thriller Performance. A Scots-born painter and born bohemian — his father was a poet with occult interests — Cammel joined “Swinging” London’s counter-culture scene in the 1960s. There his associates included experimental filmmaker Kenneth Anger and the Rolling Stones. In 1968, he convinced Warner Brothers to finance his first feature on the basis of Mick Jagger playing a starring role. Filmed that year, Performance’s boundary-challenging scenes of sex and violence held back its release until 1970.
To say that Cammel was frustrated in his ambitions would be an understatement. On at least two occasions, Marlon Brando approached him to direct pictures in which the mercurial actor was enthusiastic to star, then dropped out at the last minute. Following the release of Demon Seed, Cammel expressed disappointment in the version sent out to theatres. Although I thought it was just fine, apparently he intended it to be more comedic, a satirical view of tech gone wrong. He made just two subsequent features — 1987’s White of the Eye and Wild Side (1995) — both shock thrillers co-written with his wife China Kong. She was present when, in a final act of flamboyance, Donald Cammel committed suicide in 1996.