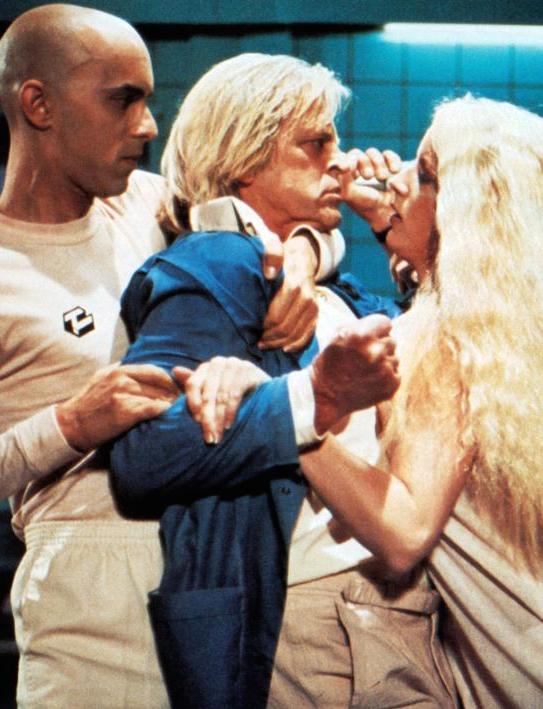 Max 404 (Don Opper, left) discovers that he has feelings for Cassandra One (Kendra Kirchner) that put him in conflict with Dr. Daniel (Klaus Kinski) in director Aaron Lipstadt’s 1982 feature Android.


The emphasis was on AI as a force for good at the 2019 Consumer Electronics Show that ended yesterday (January 11) in Las Vegas. According to Chris Smith, co-author of a 2006 academic paper called The History of Computing, the term “artificial intelligence” was coined by John McCarthy at a scientific conference held in 1956. Twelve years later, director Stanley Kubrick introduced us to the popular culture’s most tragic example of AI in his epic science fiction film 2001: A Space Odyssey. In the movie’s most emotionally fraught scene, Astronaut Dave Bowman unplugs the Discovery One’s renegade computer. “I'm afraid, Dave. Dave, my mind is going,” it says as its self-awareness slips away. “. . . There is no question about it. I can feel it. I can feel it. I can feel it. I'm afraid. Good afternoon, gentlemen. I am a HAL 9000 computer. I became operational at the H.A.L. plant in Urbana, Illinois on the 12th of January, 1992 . . .” Although the news from the CES has been all positive, today is HAL’s birthday, an occasion that should be marked with caution and some fear. In the movies, after all, thinking machines seem to channel their creators’ darkest sides. Bad ‘bots (or AIs with renegade potential) are central to the four films being added to the Reeling Back archive today (with links to each following the Afterword to this posting). Sparks fly when Max 404, a research scientist’s assistant, makes the acquaintance of Cassandra One in director Aaron Lipstadt’s intense 1982 sci-fi drama Android.

ANDROID. Written by James Reigle and Don Opper. Based on an original idea by Will Reigle. Music by Don Preston. Directed by Aaron Lipstadt. Running time: 82 minutes. Mature entertainment with the B.C. Classifier's warning: occasional violence, nudity and suggestive scenes. A LITTLE LEARNING MAKES them rebellious.
Max 404 (Don Opper) knows that he’s just an Android, but he’s absorbed so much 20th-century pop culture that he’s beginning to feel kind of human, like, waahl, Jimmy Stewart.
Max, truth to tell, is not a particularly sophisticated model. But this is the year 2036, and the manufacture of advanced bio-mechanisms has been illegal on Earth ever since the Munich riots.
Restrictions notwithstanding, Max’s boss, Dr. Daniel (Klaus Kinski), is hard at work on the construction of Cassandra One (Kendra Kirchner), the Corporation’s secret new super-android. In the interests of industrial security, they have an entire space station all to themselves.
Max, with lots of time on his hands, has become increasingly curious about humankind. When three escaped criminals in a crippled spacecraft request permission to come aboard, Max grants it eagerly.  One of the fugitives is a woman, Maggie Kallisti (Brie Howard) . . .
A little learning makes them employable. Android director Aaron Lipstadt was a Ph.D. candidate in film theory whose thesis subject was “Ideology and Exploitation: New World Pictures.”
When he sat down to interview New World's people in their Hollywood offices, producer Roger Corman offered him a job. Within two years, Lipstadt was ready to take charge of his own first feature project, an atmospheric, slyly academic sci-fier called Android.
Like other fledgling filmmakers encouraged by Corman, Lipstadt has managed to emphasize entertainment while offering bonus pleasures to the film-buff crowd. One movie in Max 404’s library of hits is Fritz Lang’s 1927 classic Metropolis.
The remarkable resemblance between actor Kinski and silent screen star Rudolf Klein-Rogge does not go unexploited. Naturally, Kinski’s Dr. Daniel, the heavy-breathing android researcher, is paralleled with Klein-Rogge’s Rotwang, builder of the robotrix Maria and, arguably, the screen’s greatest mad scientist.
Less esoteric are the conflicts set in motion by the arrival of the three human desperadoes, Maggie and her companions Gunthur Keller (Norbert Weisser) and Orlando Mendes (Crofton Hardester).
The presence of a live woman on the station overheats everyone’s logic circuits and brings out the bio in mechanical Max.
Made for less than a million dollars, Android is a capably made original. There’s a little lesson in that for a lot of would-be filmmakers.

Afterword: Around the time that I wrote the above review, genre film scholars were talking about “the school of Corman.” It had been noted that independent movie producer Roger Corman had a talent for recognizing talent. Some very successful directors, including Francis Ford Coppola, Martin Scorsese, Peter Bogdanovich and Ron Howard, learned their craft working on his low-budget features. When Aaron Lipstadt dropped out of his University of Chicago graduate program to take a job with New World Pictures, he was just changing schools. When he worked as an assistant production manager on 1980’s Battle Beyond the Stars, his classmates on the project included future directors John Sayles (the film's screenwriter) and James Cameron (its art director). Lipstadt went on to manage such memorable Corman features as Galaxy of Terror (1981) and Forbidden World (1982) before the producer green-lit his directorial debut with Android.
Lipstadt reunited with actor-screenwriter Don Opper for his second theatrical feature, the independently made City Limits (1984). A post-apocalypse tale of teen-gang warfare in Los Angeles, it featured Canadian actresses Rae Dawn Chong and Kim Cattrall in showy supporting roles. Thereafter, Lipstadt appears to have found his niche in the ever-changing world of series television. Since 1986, he’s demonstrated his versatility directing  episodes of such shows as Miami Vice, Quantum Leap, The Young Riders, Powers, Elementary and Grimm. Although he does not specialize in science fiction, he’s displayed his talent for the genre during visits to Vancouver in 2000 (three episodes of Level 9) and 2006 (an episode of The 4400).