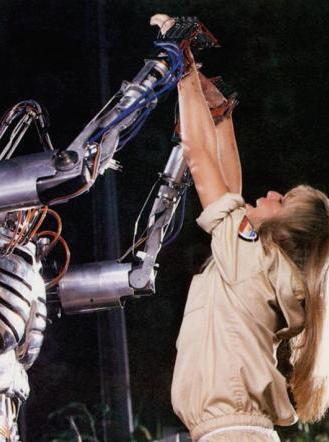 
No controlling a sex-charged robot


The emphasis was on AI as a force for good at the 2019 Consumer Electronics Show that ended yesterday (January 11) in Las Vegas. According to Chris Smith, co-author of a 2006 academic paper called The History of Computing, the term “artificial intelligence” was coined by John McCarthy at a scientific conference held in 1956. Twelve years later, director Stanley Kubrick introduced us to the popular culture’s most tragic example of AI in his epic science fiction film 2001: A Space Odyssey. In the movie’s most emotionally fraught scene, Astronaut Dave Bowman unplugs the Discovery One’s renegade computer. “I'm afraid, Dave. Dave, my mind is going,” it says as its self-awareness slips away. “. . . There is no question about it. I can feel it. I can feel it. I can feel it. I'm afraid. Good afternoon, gentlemen. I am a HAL 9000 computer. I became operational at the H.A.L. plant in Urbana, Illinois on the 12th of January, 1992 . . .” Although the news from the CES has been all positive, today is HAL’s birthday, an occasion that should be marked with caution and some fear. In the movies, after all, thinking machines seem to channel their creators’ darkest sides. Bad ‘bots (or AIs with renegade potential) are central to the four films being added to the Reeling Back archive today (with links to each following the Afterword to this posting). Channeling his mad programmer’s lust and violence, giant robot Hector becomes the serpent in the paradise that is the off-world research station in director Stanley Donen’s 1980 feature Saturn 3.

SATURN 3. Written by Martin Amis from a story by John Barry. Music by Elmer Bernstein. Produced and directed by Stanley Donen. Running time: 95 minutes. Mature entertainment with the B.C. Classifier’s warning: some gory scenes and occasional nudity. FOR THE MOMENT, SCIENCE fiction is the major movie trend. And, for the moment, the British seem to have a better grip on it.
Last year [1979] an Englishman — director Ridley Scott — gave us the outer space shocker Alien. Tomorrow [February 1980], Vancouver filmgoers get their first look at Saturn 3, a film that combines the terror of Alien with the sexual tension of 1977’s Demon Seed.
The setting is a self-contained scientific station somewhere beneath the surface of Titan, the third moon of the planet Saturn. Maintained by hydroponic researchers Adam (Kirk Douglas) and Alex (Farrah Fawcett), it is seeking new and better ways to feed the huge population of an overcrowded Earth.
Truth to tell, neither of its inhabitants is particularly anxious to complete their mission. They are having too much fun enjoying the peace, the quiet and one another.
Earth, on the other hand, is getting anxious about the groceries. A new super-robot and its human programmer are dispatched to help the Saturn 3 project get back on schedule.
There is a twist, of course.
Captain James (Douglas Lambert), the man assigned to assist the researchers, never gets off the launch pad. He’s waylaid and killed by the none-too-pleasant Captain Benson (Harvey Keitel), who proceeds to take James’s place in the shuttlecraft.
Though trained and equipped for the mission, Benson was considered less stable than James. Stability, it turns out, is crucial to programming robots like Hector, the eight-foot [2.4 m] automaton being shipped to Saturn 3.
Hector, you see, is the first of the Demi-God series. It is equipped with a brain grown from living tissue. It is programmed by “direct input,” a mind-to-mind radio link with its assigned programmer.
In effect, Hector becomes its programmer's mechanical clone. Once assembled, it quickly absorbs Benson's resentments and his capacity for killing. Nor is Benson's gut reaction to the beautiful Alex lost on the robot.
Saturn 3 is full of surprises. It was British-born production designer John Barry who came up with the original idea. Barry, responsible for the look of such recent films as [1977’s] Star Wars and Superman, shared his dream with producer Stanley Donen, who sold the concept to British movie mogul Lord Lew Grade.
In Grade's hands, Barry's modest concept grew into a multi-million-dollar project. Martin Amis, son of science fiction's literary chronicler Kingsley (New Maps of Hell) Amis, produced a final script.
Donen agreed to produce the picture and Barry was set to make his directorial debut.
For Barry, the dream went sour during the first weeks of shooting. Donen replaced him as director, and he went back to design work, taking on the [1980] Star Wars sequel. He died a short time later.
Another surprise: Donen, 56, the director of such big studio musicals as 1952’s Singin’ in the Rain and The Pajama Game (1957) actually manages to carry it off. The sense of timing, so crucial to song and dance numbers, serves him well in building tension and a mood of genuine menace.
Like Alien, Saturn 3 is ultimately a lady-in-distress tale. Unlike Alien, our heroine is not concerned so much with destruction as with a Fate Worse than Death. A sex-starved human is one thing; a lust-crazed robot is quite another.
Another surprise. All of the performances are bang-on.
Keitel, who specializes in characters on the edge of psychosis (Mean Streets, Blue Collar), is cool, controlled and thoroughly crackers. You don’t want to know what’s on his mind.
Douglas turns in an unexpectedly complex performance as the suddenly threatened king of the mountain. In Adam, we see a man who is less a humanitarian than an ageing mandarin, set in his ways and jealous of his privileges.
Alex is his most basic privilege. She is his assistant, his colleague and his toy. She has never been to earth and, apparently, has no desire to go. She wants nothing more than him.
The biggest surprise is Farrah Fawcett. Having bombed out in her two previous pictures (1978’s Somebody Killed Her Husband, 1979’s Sunburn), she hardly seemed like a candidate for a three-character drama.
The trick here, of course, is typecasting. Fawcett, playing a vacant tease, is her famous [1976] poster come to life, providing titillation in three dimensions. When Keitel’s character responds to the implied come-on, she shows just enough fear and confusion to make the Douglas character’s protective behaviour credible.
Making successful science fiction seems to be a matter of attitude. For the moment, the Americans seem to be hung up on hardware and light shows.
The Brits, by contrast, remember what H.G. Wells used to say of his own "scientific romances.” The idea, Wells said, was to leave the reader with the feeling of having enjoyed a "good, gripping dream.”
The makers of Saturn 3 were paying attention. Conceived by a designer and realized by a one-time effects director, it is a slick and satisfying scientific nightmare.

Afterword: For me, one of the great delights of film reviewing has been making the connections: connecting the dots that provide us with an understanding of the bigger picture. It doesn’t necessarily happen all at once. Thirty years after Saturn 3’s release, Canadian science journalist Peter Nowak published a thought-provoking book called Sex, Bombs and Burgers: How War, Porn and Fast Food Created Technology As We Know It (Viking Canada; 2010). In it, he traced the history of post-Second World War technology, demonstrating how its greatest advances have resulted from the needs of the military, of the adult entertainment and the fast-food industries. In addition to providing a stimulating new perspective on recent social history, Nowak helps us to see Saturn 3 as an unexpectedly sharp commentary on where we are today.
As  noted in my 1980 review, the scientific couple in the movie are engaged in food research. The automaton Hector — named for the mythic Trojan warrior — is obviously the product of military funding.The idea that an AI that's able to channel human emotions, when it becomes aware of lust, will become an insatiable sex-bot, well, that’s just pornographic.
Saturn 3 was director Stanley Donen’s penultimate feaure film. Despite a long, often distinguished career, his final feature — 1984’s Blame It on Rio — was a misfire, a sex comedy in the worst possible taste.