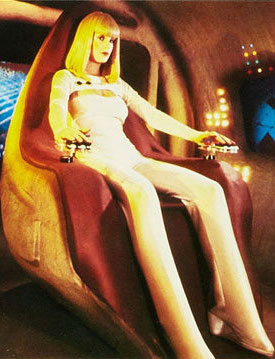 Dorothy Stratten stars as the AI in control of a starship in writer-director William Sachs’s 1980 sci-fi comedy Galaxina.

Parts from the catalogue


Overstated to the point of absurdity


The emphasis was on AI as a force for good at the 2019 Consumer Electronics Show that ended yesterday (January 11) in Las Vegas. According to Chris Smith, co-author of a 2006 academic paper called The History of Computing, the term “artificial intelligence” was coined by John McCarthy at a scientific conference held in 1956. Twelve years later, director Stanley Kubrick introduced us to the popular culture’s most tragic example of AI in his epic science fiction film 2001: A Space Odyssey. In the movie’s most emotionally fraught scene, Astronaut Dave Bowman unplugs the Discovery One’s renegade computer. “I'm afraid, Dave. Dave, my mind is going,” it says as its self-awareness slips away. “. . . There is no question about it. I can feel it. I can feel it. I can feel it. I'm afraid. Good afternoon, gentlemen. I am a HAL 9000 computer. I became operational at the H.A.L. plant in Urbana, Illinois on the 12th of January, 1992 . . .” Although the news from the CES has been all positive, today is HAL’s birthday, an occasion that should be marked with caution and some fear. In the movies, after all, thinking machines seem to channel their creators’ darkest sides. Bad ‘bots (or AIs with renegade potential) are central to the four films being added to the Reeling Back archive today (with links to each following the Afterword to this posting). Apparently willing to add “bad girl” to her programming is the robotrix at the controls of the starship Infinity in director William Sachs’s 1980 sci-fi comedy Galaxina.

GALAXINA. Music supervision by Arlon Ober. Written and directed by William Sachs. Running time: 95 minutes. Mature entertainment with the B.C. Classifier’s warning: frequent coarse and suggestive language. “SHE HAD TO BE PERFECT,” said writer-director William Sachs during the filming of Galaxina.”There are a lot of pretty girls around but we wanted someone unusual.
"You sit in a casting office and 100 actresses come through, and it's almost like they’re all one person.” Then, Sachs said, Dorothy Stratten walked in.
“Everybody stopped working and looked up at her. They didn't do that for any of the others so we knew we had something in Dorothy.”
lt’s too bad that Sachs and company didn’t have something for Dorothy. Galaxina, designed to be a laugh-a-minute spoof of all those big-budget science-fiction spectaculars, turns out to be a series of TV-weight skits and stale sketches.
The film opens with a Star Wars-like crawl explaining how the spaceways of 3008 are patrolled by ships of the United Intergalactic Federation. Our story is set aboard Police Cruiser No. 38, The Infinity.
Next, we hear the voice of The Infinity’s commander Captain Cornelius Butt (Avery Schreiber) making a Star Trek-like log entry. His crew consists of Sergeants Thor (Stephen Macht) and Buzz McHenry (James David Hinton).
On the engineering deck we meet a bat-winged black man named Maurice (Lionel Smith) and Sam Wo (Tad Horino), an elderly Asian. The ship is controlled by the beautiful robotrix, Galaxina (Stratten).
From its position behind an asteroid with a billboard built on it, The Infinity watches for speeders. When it sees the ship piloted by the alien Ordric (Ronald Knight) streak by, it gives chase.
(Sample humour: McHenry asks if he can turn on the flashing lights and siren. Thor, after calling him an unprintable name, informs him that "you can’t hear sounds in space.”)
In an exchange of laser bolts. The Infinity is crippled. While under repair, it is ordered to journey to the convict colony on Altair I (a reference to 1956’s Forbidden Planet) to collect the "Blue Star,” a gemstone that “has the power of the stars within it."
Along the way, Thor declares his love for Galaxina.  Although she has been introduced as a piece of mute machinery, she responds by reprogramming herself for speech and feeling. (She promises to acquire other functions by ordering optional parts from the catalogue.)
When they reach the prison planet, it is she who is sent to do battle with Ordric, who also craves the power of the Blue Star.
Briefly described, the film has a coherence not evident on the screen. In his attempt to work in as many movie references as possible — his haul includes 2001, CE3K, Alien, Westworld, Barbarella, Buck Rogers, Flash Gordon and Frankenstein — Sachs sacrifices much-needed internal consistency.
With the exception of Stratten, all of the performances are overstated to the point of absurdity. By contrast, Playboy centrefold model Stratten is required to play a largely inanimate automaton, a role hardly designed to showcase acting talent.
Inconsequential and intermittently funny, Galaxina picked up a U.S. “R” (Restricted) rating for a lot of unnecessary four-letter words on the soundtrack. The B.C. Classifier gives it a more realistic “Mature entertainment” label.
*    *    *
FILM TRIVIA: In Star Wars, British actor David Prowse may wear the Darth Vader costume, but Vader’s voice is supplied by an American, James Earl Jones. In Galaxina, the Vader-like villain is called Ordric. His costume is worn by Ronald Knight, with Montreal-born Percy Rodriguez providing the voice performance.
*    *    *
MORE TRIVIAL TRIVIA: The movie seen on The Infinity’s monitor is 1960’s The First Spaceship on Venus, made in East Germany as Der Schwiegende Stern (The Silent Star). An English-dubbed version was distributed in North America by Crown International, the company that produced Galaxina. Set in the 1980s, it starred Yoko Tani as a member of an international expedition to Venus.
*    *    *
DOROTHY STRATTEN (1960-1980)
Galaxina was premiered in Kansas City on Friday, August 15, 1980, the day after Dorothy Stratten was murdered. In less than two years, the Vancouver-born actress had appeareded in five feature films and was well on her way to becoming a recognized screen star. Here, for the record, is a list of her movie roles.
AMERICATHON (co-written and directed by Neil Israel). Dorothy Stratten made her feature film debut with a bit part in this oddball comedy. She is seen escorting Oklahoma Roy Budnitz (Meat Loaf) on stage during the telethon that is the film's subject. (1979)
SKATETOWN, U.S.A. (co-written, produced and directed by William A. Levey). In her first speaking role, Stratten appears on skates, part of the crowd at a roller-disco rink. (1979)
AUTUMN BORN (co-written, produced and directed by Lloyd Simandl). In her first starring role, Stratten played a young heiress who is victimized by a scheming uncle. Principal photography was completed in Winnipeg during 1979 with a release scheduled for this fall. (1980).
GALAXINA (written and directed by William Sachs). Stratten has the title role in this sci-fi spoof, the story of a space cop who falls in love with a robotrix. (1980)
THEY ALL LAUGHED (written and directed by Peter Bogdanovich). Stratten has a featured role in this contemporary urban comedy with a cast that includes Ben Gazzara, John Ritter and Audrey Hepburn. Shot in New York in early 1980, its release was delayed following Stratten’s death. (1981)

*    Dorothy Stratten’s television work included a guest shot on The Johnny Carson Show (NBC) and bit part in The Victim/The Mermaid, a 1979 episode of Fantasy Island (ABC). As Miss Cosmos she was rather more visible in the 1979 episode of Buck Rogers in the 25th Century (NBC) called Cruise Ship to the Stars, and was featured opposite James Caan in The Playboy Roller-Disco and Panama Party (ABC).
According to the current (May 1980) issue of Playboy Magazine, exploitation of the Stratten name will continue. MGM has announced that Larry (CHiPs) Wilcox will produce The Dorothy Stratten Story as a made-for-TV movie for NBC.
Director Bob (All that Jazz) Fosse has purchased the rights to Village Voice reporter Teresa Carpenter’s syndicated newspaper series Death of a Playmate. And then there’s Playboy itself waiting with a final Stratten pictorial feature, a selection of photos that the magazine promises to run when "the hurt of it” passes.

The above is a restored version of a Province review by Michael Walsh originally published in 1981. For additional information on this archived material, please visit my FAQ. >

Afterword: When Galaxina arrived in Vancouver in 1981, details of the death of the Vancouver-born Dorothy Stratten at the hands of her husband Paul Snider were still well known to newspaper readers. Director Bob Fosse’s film Star 80 opened in late 1983, and you can read more on the subject by clicking on the link to its Reeling Back posting. The made-for-TV movie mentioned above was first broadcast on the evening of November 1, 1981. Directed by Gabrielle Beaumont, it was called Death of a Centrefold: The Dorothy Stratten Story, and starred Jamie Lee Curtis in the title role.
Galaxina was writer-director William Sachs’s seventh feature. Arguably the independent moviemaker’s most famous film, its cult status is almost entirely based on Dorothy Stratten’s presence in the title role.