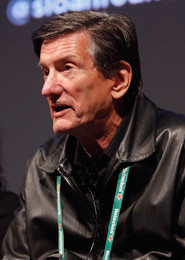 Director JOHN BADHAM talks about his film War Games during a panel discussion at the 2012 Tribeca Film Festival in New York.
THE WHOLE STORY — To see a complete list of the 1,133 items currently posted to Reeling Back, visit the FULL SITE INDEX. To locate specific names or subjects, type your key word(s) into the Search box (located in the right-hand corner of the nameplate above), and click on the magnifying glass (search) symbol. The archive grows with some regularity, so feel free to explore.


As Americans go to the polls today (November 3), not a few political reporters will be outlining books based on their campaign experiences. Most of them will end up unfinished in a desk drawer. And yes, I’ve planned books about movies, including one featuring the work of John Badham.

Earlier last month, I marked Reeling Back’s seventh anniversary with a blog posting. In it, I shared my preliminary notes for a never-written book called 7x7.

Reading the recently published second edition of John Badham On Directing, reminded me of another bright idea that I’d had shortly after the release of his 1986 feature Short Circuit. By early 1987, I’d assembled enough material to actually write a pitch for another “original, non-fiction work of popular film history.” The working title of that projected best-seller was The Silicon Screen.

Intended for the eyes of a prospective publisher, my single-page outline focused on the essentials, which included:

“CONTENT: The book tells the story of the computer as seen through the eyes of the world's feature filmmakers. Acknowledging that the computer and computer technology have brought about the most significant social changes since the Industrial Revolution, The Silicon Screen examines how the movies have presented it and its effects to the public.
“The book offers readers the first history of story-telling films that deals with the subject of artificial or machine intelligence. (No such history is currently [1987] available.) In developing its own story, The Silicon Screen analyzes the meaning and impact of computer films by noting and describing their recurring images, patterns and attitudes.
“With more than 100 computer-themed films already in existence, an attempt to chart this “cybernetic cinema” is both timely and necessary.  Themes that The Silicon Screen develops include:
“THE COMPUTER REVOLUTION: A sketch history of electronics since 1945 to place the films in their social context.
“BOMB VS BRAIN: How the drama of a perceived atomic age at first overshadowed the fundamental challenges of the new computer age.
“THE PASSION OF HAL 9000: Examines the computer fallen (in 2001: A Space Odyssey) and redeemed (in 2010).
“FRIENDLY 'DROIDS: The computer as pal and working pet.
“LOVE MACHINES: Female robot fantasies.
“DIGITAL DEMONS: The computer as villain and rival.
“DIRECTORIAL VISIONS: 1. John Badham, the optimist (Blue Thunder; WarGames; Short Circuit) 2. Michael Crichton, the pessimist (Westworld; Looker; Runaway).
“THE PLAYING FIELDS OF VULCAN: Video game films.
“ELECTRIC AUTEURS: Use of the computer in the filmmaking process.”

For reasons I really don’t remember, I failed to follow through on the idea. No publisher ever received the pitch. The page has languished in a file folder (along with the notes and lists that I’d made at the time) for more than 30 years, and the whole idea is probably well past its best-before date.

One fact that stands out for me today: Even then it was obvious that John Badham (along with Michael Crichton) was a directorial visionary for the new computer age. Today’s Reeling Back postings celebrate his new book and five of his feature films:

JOHN BADHAM ON DIRECTING — Revised and updated, the 2020 edition of Chapman University professor Badham’s readable textbook offers a combination of wit and wisdom on the craft of creating memorable screen entertainment. (November 3)

WHOSE LIFE IS IT ANYWAY? — Badham directed this 1981 adaptation of an intense London stage drama that confronted the fraught issue of euthanasia. Richard Dreyfuss is the paralyzed patient fighting for his right to die. (November 3)

POINT OF NO RETURN — A remake better than its original, Badham’s 1993 adaptation of Luc Besson's La Femme Nikita stars Bridget Fonda as a woman conscripted into secret service as a government assassin. (November 3)

DROP ZONE — A tale for uncertain times, Badham’s 1994 action thriller stars Wesley Snipes as a disgraced U.S. marshal in search of revenge in the frontier societies of computer criminals and skydiving gangs. (November 3)