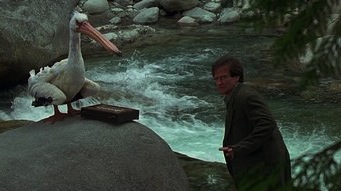 
In Part 13 of a 20-part series, Reeling Back continues The Greater Vancouver Book's Feature Film Festival, with restored notes on 10 features about Things that Go Bump in the Night.

FEATURE FILMS MADE IN VANCOUVER
Prepared for Chuck Davis and The Greater Vancouver Book — June, 1995
[Published in 1997 by The Linkman Press]
By MICHAEL WALSH
[PART 13: THINGS THAT GO BUMP IN THE NIGHT]

PROGRAM 13. THINGS THAT GO BUMP IN THE NIGHT.

FRIGHT-NIGHT FEATURES ARE a film industry staple. Since a hint of the supernatural is enough to induce shivers, Vancouver has played host to its share of demons, devils, wraiths, entities and ectoplasmic emanations. The list includes:

A NAME FOR EVIL (1970; Bernard Girard) with Robert Culp, Samantha Eggar, Reed Sherman. An architect (Culp) inherits an 18th century mansion and is driven to extremes when his wife (Eggar) is seduced by the resident ghost. Location shooting took place in the Wigwam Inn overlooking Indian Arm. Also known as THE GROVE and THE FACE OF EVIL, this troubled project was filmed by M-G-M, then acquired by magazine publisher Bob Guccione to become the first film released by his Penthouse Productions in 1973.

THE CHANGELING (1979; Peter Medak) with George C. Scott, Trish Van Devere, Melvyn Douglas, John Colicos. Vancouver plays a Gothic-looking Seattle in this tale of a restless spirit attempting to communicate with a grieving widower (Scott). Produced by Cineplex Theatres founder Garth Drabinsky, this Genie Award best-picture winner made use of such locations as the Orpheum Theatre, Gastown's Hotel Europe and a Hudson Street mansion with a view of the North Shore mountains.

THE RESURRECTED (1992; Dan O'Bannon; based on the 1941 novel The Case of Charles Dexter Ward by H.P. Lovecraft) with Chris Sarandon, John Terry, Jane Sibbert. This time-hopping adaptation of Lovecraft's posthumously published novel is about a basement scientist (Sarandon) obsessed with raising the dead, and his 18th-century ancestor (also Sarandon) who possessed the secret. B.C. plays Rhode Island in director O'Bannon's second (and last) feature. Also known as THE TOMB OF CHARLES DEXTER WARD and SCATTERBRAIN, it was filmed for release in the U.S. by M-G-M.

THE HUNTED (1995; J.F. Lawton) with Christopher Lambert, John Lone, Joan Chen. Aided by the ghost of a gangster's murdered mistress (Chen), an American businessman (Lambert) in Japan does battle with her Ninja killer (Lone). After some establishing shots in Nagoya, a variety of B.C. locations — among them Queen Elizabeth Park and Lynn Canyon — play a ninja-infested modern Japan. A Universal Pictures release, this was Christopher (Knight Moves) Lambert's second working visit to Vancouver.

JUMANJI (1995; Joe Johnston; based on the 1981 novel by Chris Van Allsburg) with Robin Williams, Kirsten Dunst, Bonnie Hunt. Released from his 26-year-long imprisonment in a magic land, an unlucky board-game player (Williams) returns to the real world with some not-so-nice special-effects creations right behind him. The first of eight feature films that actor Williams made in B.C., this $50-million action fantasy shot some scenes in the U.S. to establish its New England setting. The bulk of the TriStar picture was filmed in and around Vancouver and on Bridge Studios sets.

The above is Part 13 of a 20-part restoration of a Greater Vancouver Book article by Michael Walsh originally published in 1997. For additional information on this archived material, please visit my FAQ.