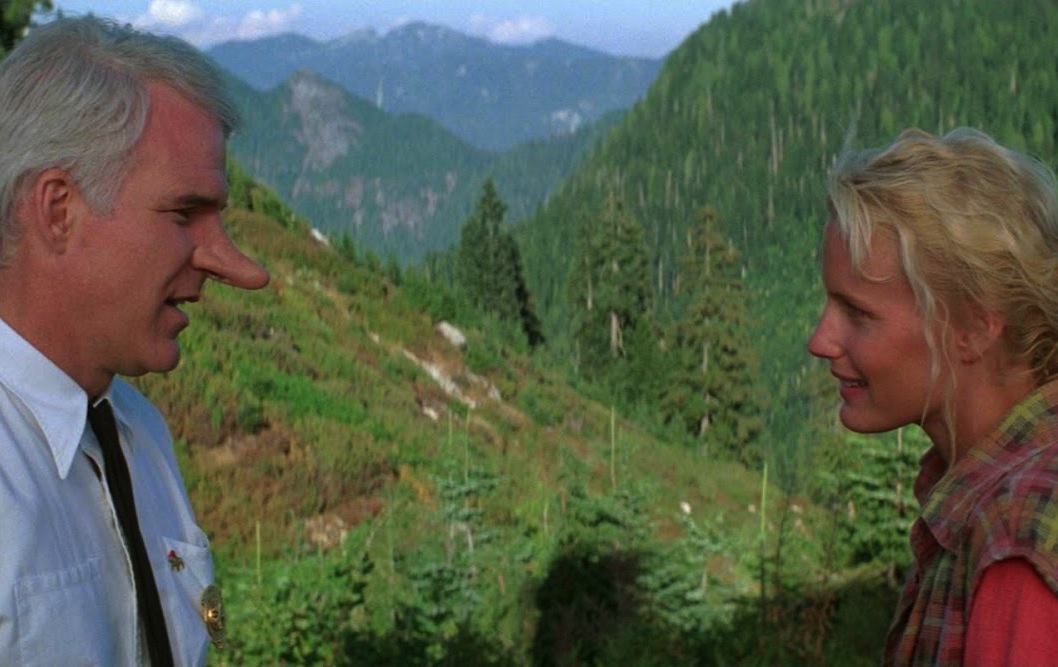 B.C.'s Selkirk Mountains provide the backdrop for actors Steve Martin and Daryl Hannah as they play a scene in 1987's Roxanne.


In Part 10 of a 20-part series, Reeling Back continues The Greater Vancouver Book's Feature Film Festival, with restored notes on the 12 features in the program called Local Heroes.


FEATURE FILMS MADE IN VANCOUVER
Prepared for Chuck Davis and The Greater Vancouver Book — June, 1995
[Published in 1997 by The Linkman Press]

BIG SCREENS NEED BIG stories. It's no surprise, then, that filmmakers find inspiration in the larger-than-life deeds of famous figures. Some Vancouver-made features celebrating outstanding individuals (both real and imagined) are:

ANOTHER SMITH FOR PARADISE (1972; w/d. Tom Shandel) with Henry Ramer, Frances Hyland, Vladimir Valenta, Pia Shandel. In this examination of ethnic ambition, a dynamic Ukrainian-Canadian stock promoter (Ramer) plans a grand gesture to impress Vancouver's WASP Establishment. His plans are complicated by a philandering wife (Hyland) and an ongoing investigation into his taxes. Made for just $200,000, independent filmmaker Shandel's debut feature made use of Vancouver's 1971 Sea Festival parade and locations on the University of B.C. campus to tell a satirical tale of social mobility.

THE GREY FOX (1982; Phillip Borsos) with Richard Farnsworth, Jackie Burroughs, Wayne Robson. Farnsworth has the title role in a story inspired by the life of Bill Miner, the gentleman bandit who robbed trains in turn-of-the-century B.C. Director Borsos returned to the historic Sweeney Cooperage on False Creek, the subject of his first documentary short Cooperage (1976), to shoot scenes for his first feature. Released by UA Classics in the U.S., its B.C. Interior locations included Cranbrook, Lillooet, Fort Steele and Douglas Lake.

STAR 80 (1983; Bob Fosse; based on The Death of a Playmate by Teresa Carpenter) with Mariel Hemingway, Eric Roberts, Cliff Robertson. Hemingway has the title role in the tragic story of Dorothy Stratten, the Canadian-born Playboy Magazine model "discovered" by Paul Snider (Roberts), who became an actress and a 1980 Hollywood murder victim. Among the Vancouver locations used in the Warner Bros. feature were Seymour Street's Penthouse strip club, the Blue Horizon Hotel and the actual Hastings Street Dairy Queen where Snider first met Stratten.

THE TERRY FOX STORY (1983; Ralph Thomas) with Eric Fryer, Robert Duvall, Rosalind Chao. Fryer stars as the one-legged Port Coquitlam runner who ignored his spreading cancer to inspire the nation with his 1980 Marathon of Hope. Though released theatrically in Canada, director Thomas's biographical feature was produced by HBO. It was the U.S. cable network's first made-for-TV movie. Scenes were shot in Newfoundland and Ontario as well as in and around Vancouver.

WALLS (1984; Tom Shandel; based on the stage play by Christian Bruyère) with Winston Rekert, Andrée Pelletier, Alan Scarfe. A charismatic convict (Rekert) draws public attention to barbaric prison conditions in this drama inspired by a 1975 B.C. Penitentiary hostage-taking. Combative social documentarist and independent filmmaker Shandel filmed his adaption of Bruyère's play within the walls of the decommissioned federal prison in New Westminster, where the actual incident had taken place. Also known as LOCK UP.

CHAINDANCE (1991; Allan A. Goldstein) with Rae Dawn Chong, Michael Ironside, Brad Dourif. Based on actual penal reform proposals from the 1970s, this period prison drama focuses on a social worker (Chong) with a plan to turn convicts into care givers. In addition to shooting on Vancouver's mean streets, Goldstein found locations for his independent feature within the walls of Burnaby's Oakalla Prison and the Riverview Hospital in Coquitam.

WHALE MUSIC (1994; Richard J. Lewis) with Maury Chaykin, Cyndy Preston, Jennifer Dale. Rock idealism is recalled in this story of a retired, mildly mad pop star (Chaykin) who hides out in a seaside villa composing symphonic works for passing whale pods. Invoking the magic of the movies, director Lewis offers as the view from Vancouver's Hycroft Mansion Howe Sound, filmed from the North Shore's Whytecliff Park. The independent production also paid visits to the Penthouse nightclub and the Vancouver Aquarium.

MAGIC IN THE WATER (1995; Rick Stevenson) with Mark Harmon, Harley Jane Kozak, Sarah Wayne. A radio talk show host (Harmon) gets to know his kids during a vacation spent searching for Glenorky, a mythical aquatic monster inspired by Okanagan Lake's Ogopogo. Seattle-born Stevenson made his directorial debut with this family fantasy filmed on location in and around Kaslo, B.C. Additional scenes for this TriStar Pictures release were shot in the North Shore's Lynn Canyon Park and on a cave set built for Glenorky inside Burrard Street's Molson Brewery.

The above is Part 10 of a 20-part restoration of a Greater Vancouver Book article by Michael Walsh originally published in 1997. For additional information on this archived material, please visit my FAQ.