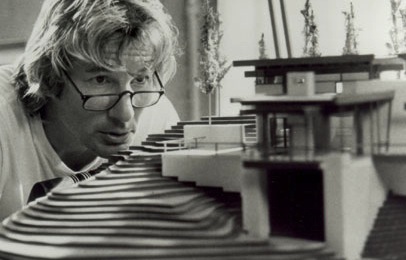 
In Part 8 of a 20-part series, Reeling Back continues The Greater Vancouver Book's Feature Film Festival, with restored notes on the nine features in the program called Self-Portraits.

Prepared for Chuck Davis and The Greater Vancouver Book — June, 1995
[Published in 1997 by The Linkman Press]
By MICHAEL WALSH
[PART 8: SELF-PORTRAITS]

VERSATILITY IS THE KEY to Vancouver's popularity as a film location. While the ability to pass for Seattle, New York or Nagoya, Japan, attracts business, it's also a sore point with civic boosters. "Vancouver is never Vancouver in the movies" goes an oft-heard complaint. But sometimes it is. Examples include:

JOHNNY STOOL PIGEON (1949; d. William Castle) with Howard Duff, Shelley Winters, Dan Duryea. International drug dealers are tracked to their downtown Vancouver lair by a heroic U.S. Treasury agent (Duff). In 1948, with talk of federal film quotas in the air, U.S. movie industry lobbyists were dispatched to Ottawa to propose the "Canadian Co-operation Project" — essentially a promise by the Hollywood studios to include more references to Canada in their films. They didn't promise the references would be nice, though, and the brief scenes shot outside the railroad station at the foot of Granville Street in this Universal Pictures crime thriller were among the results.

THE SWEET AND THE BITTER (1962; d. James Clavell) with Yoko Tani, Paul Richards, Torin Thatcher. Intent on avenging the death of her father, a Japanese fisherman interned during the war, a dutiful daughter (Tani) comes to Vancouver looking for the Scots businessman (Thatcher) who stole her father's boats. Instead, she falls in love with the businessman's son (Richards). Locally financed, this social-justice drama was produced by the same company (Commonwealth Productions) that built West Vancouver's $1.5-million Panorama Studios. Shot on Steveston locations, it remained unseen until 1967, then premiered to damning reviews at Vancouver's Orpheum Theatre. Released in the U.S. as SAVAGE JUSTICE.

RUSSIAN ROULETTE (1975; d. Lou Lombardo; based on the 1974 novel Kosygin Is Coming by Tom Ardies) with George Segal, Christina Raines, Denholm Elliott. An RCMP corporal (Segal) uncovers a plot to assassinate Soviet premier Alexei Kosygin during his 1971 state visit to Vancouver. Urban locations abound, building to the AVCO Embassy film's action climax, a shootout on the distinctive green roof of the Hotel Vancouver.

SHOOT TO KILL (1988; d. Roger Spottiswoode) with Sidney Poitier, Tom Berenger, Kirstie Alley. Tracking a deranged killer to Vancouver, an FBI agent (Poitier) stakes out Robson Square, leads the hot pursuit through downtown and shoots it out aboard a B.C. ferry. Touchstone Pictures also made use of Squamish and wilderness locations such as Buntzen Lake and the Coquihalla and Nairn Falls provincial parks to double for Washington state. Released in the U.K. as DEADLY PURSUIT.

THE BURNING SEASON (1993; d. Harvey Crossland) with Akesh Gill, Ayub Khan Din, Dale Azzard. Bored with her life in the Vancouver suburbs, a young Indo-Canadian matron (Gill) has an affair with  her college instructor (Din), a dashing Rajput prince. Reflecting the diverse makeup of B.C.'s population, this independent feature was filmed on locations in Vancouver's East-Asian neighbourhoods, as well as in India itself.

IMPOLITE (1993; d. David Hauka) with Robert Wisden, Christopher Plummer, Susan Hogan. A boozy reporter (Wisden) manages the extra legwork needed to cover Howe Street and get a big scoop for the Vancouver Gazette. Among the picturesque downtown locations seen in this somewhat surreal independent feature is the city room of Vancouver's Province newspaper.

INTERSECTION (1994; d. Mark Rydell; based on the 1967 novel Les Choses de la Vie by Paul Guimard) with Richard Gere, Sharon Stone, Lolita Davidovich. Actor Gere plays a Vancouver architect with an Arthur Erickson-like style and a personal life complicated by the demands of a wife (Stone) and a lover (Davidovich). Not unexpectedly, locations for this Paramount Pictures remake of the 1970 French feature Les Choses de la Vie include Arthur Erikson's actual Gastown offices and his visually arresting Museum of Anthropology on the University of B.C. campus.

The above is Part 8 of a 20-part restoration of a Greater Vancouver Book article by Michael Walsh originally published in 1997. For additional information on this archived material, please visit my FAQ.