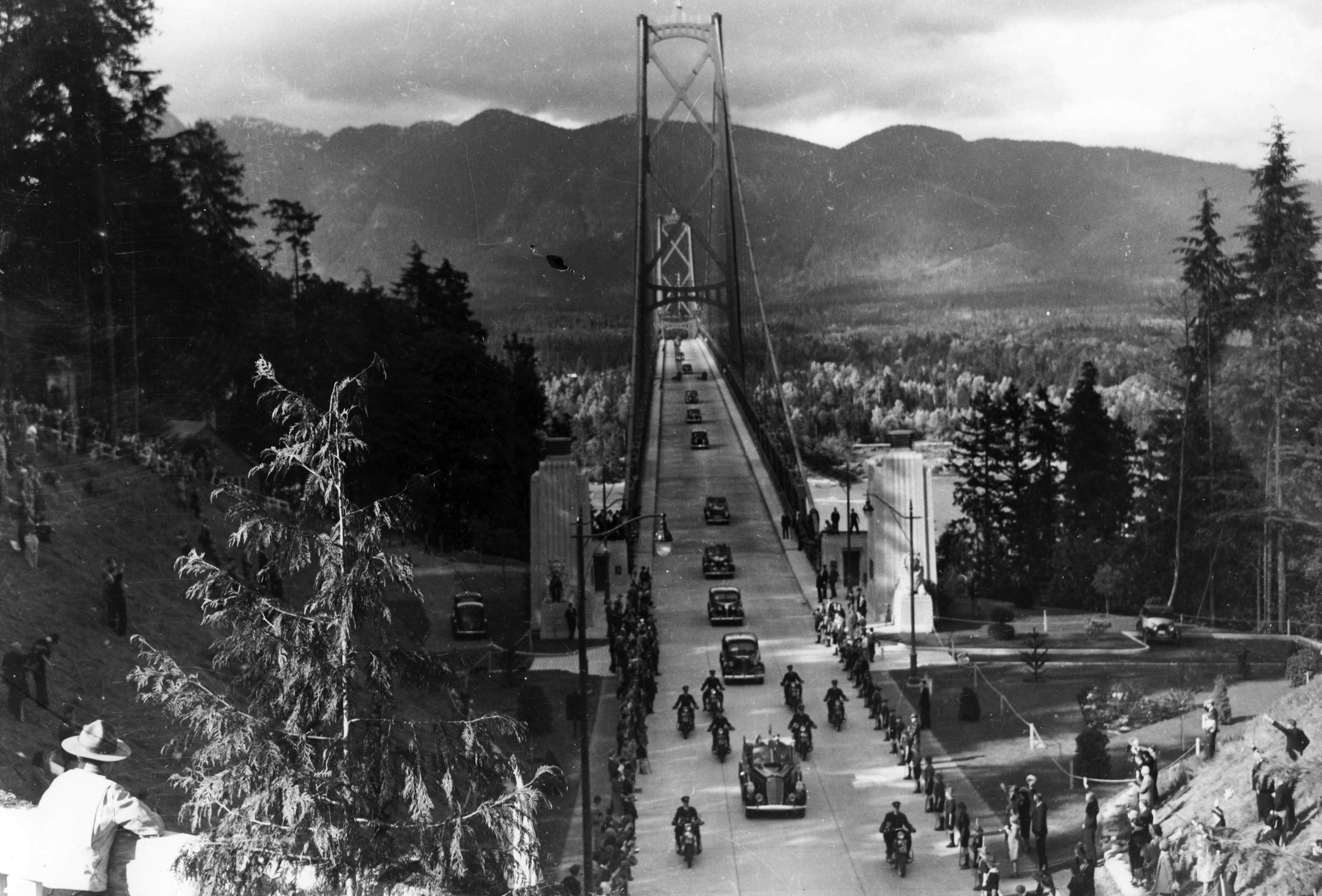 Their Royal Highnesses King George VI and Queen Elizabeth lead a motorcade across the newly-built Lions Gate Bridge during their stopover in Vancouver, recorded in the documentary feature The Royal Visit (1939).


In Part 4 of a 20-part series, Reeling Back continues The Greater Vancouver Book's Feature Film Festival, with restored notes on the four features in the program called Documentary.

Prepared for Chuck Davis and The Greater Vancouver Book — June, 1995
[Published in 1997 by The Linkman Press]
By MICHAEL WALSH
[PART 4: Documentary Features]

THIS IS YOUR PROGRAM guide to a series of 20 movie retrospectives. Together, they include all of the theatrical feature films made in Vancouver and in release as of June, 1995. (Our current program does not include made-for-TV pictures.) Though we've tried to be as complete as possible, we've almost certainly missed a few. If you know of any, please let us know. [Readers of this website who wish to get in touch with additions or corrections can reach me by using the Reeling Back Contact Me button.]
Our notes on each picture include its title (and any alternate titles), its year of release, the director, leading players and a brief description.
Our show continues with . . .

CANADIAN NON-FICTION FILMS are world famous. Our National Film Board maintains a legendary standard of excellence and its documentary shorts collect Oscars with satisfying regularity. Made in the public interest, its productions are most often seen in schools, on television and in festival settings. By contrast, documentary features made for commercial theatrical release are quite rare. Our Vancouver examples include:

THE ROYAL VISIT (1939; d. Frank Badgley) with Rupert Lucas (narrator), HRH George VI, HRH Elizabeth. The Canadian Pacific Railroad's Hudson series locomotives won the right to be called Royal for their service here, a cross-Canada tour that ended with Their Majesties enjoying a Vancouver welcome. Prime Minister William Lyon Mackenzie King noted in his diary of May 29: "The day in Vancouver was one of the finest on the entire tour." Produced by the Canadian Government Motion Picture Bureau.

GREENPEACE — VOYAGES TO SAVE THE WHALES (1976; d. Michael Chechik, Fred Easton, Ron Precious) with Don Francks (narrator), Bob Hunter, George Korova. The good ship Phyllis Cormack and its crew of Vancouver environmentalists face down Soviet whalers on the high seas, an encounter captured by a trio of Simon Fraser Film Workshop alumni. Their independent feature, seen in theatres and on television around the world, won the 1977 Canadian Film Award for best documentary.

HOOKERS ON DAVIE (1984; Janice Cole, Holly Dale) with Tiggy, Ricky, Joey, Mark "Michelle" Spier. Torontonians Cole and Dale recorded the stories told to them by four West End prostitutes and three transsexuals, in a picture that offers its shocks without analysis or context. Their independently produced feature, released theatrically by Pan Canadian Film, was nominated for a Genie Award as the year's best documentary.

STRIPPER (1986; d. Jerome Gary) with Kimberly "Danyel" Holcomb, Loree "Mouse" Menton, Lisa "Gio" Saurez. New Yorker Gary looked at the lives of the young women who danced nude in B.C., at a time when Vancouver was home to what the director considered "the best strip bars in the world." Locations for Gary's Twentieth Century Fox release include the show lounge of Powell Street's Drake Hotel.

The above is Part 4 of a 20-part restoration of a Greater Vancouver Book article by Michael Walsh originally published in 1997. For additional information on this archived material, please visit my FAQ.