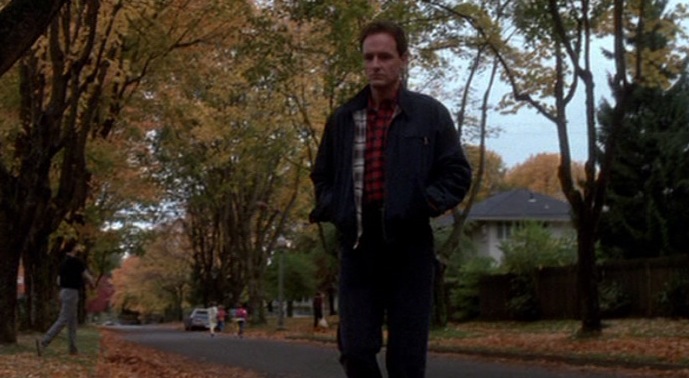 Terry O'Quinn stalked autumnal Vancouver West Side streets in the title role in 1987's The Stepfather.


In Part 14 of a 20-part series, Reeling Back continues The Greater Vancouver Book's Feature Film Festival, with restored notes on the 15 shock features best described as Cabin Fever Dreams.


FEATURE FILMS MADE IN VANCOUVER

Prepared for Chuck Davis and The Greater Vancouver Book — June, 1995
[Published in 1997 by The Linkman Press]
By MICHAEL WALSH
[PART 14: CABIN FEVER DREAMS]

NOT EVERYTHING THAT FRIGHTENS us lives outside. The mind is capable of creating its own demons and countless screen obsessives, compulsives and dangerously deranged villains have emerged from its dark depths. Consider, for example, Vancouver's own psycho-thriller caseload:

THE MAD ROOM (1969; Bernard Girard; based on the 1940 stage play Ladies in Retirement by Reginald Denham and its 1941 screen adaptation) with Stella Stevens, Shelley Winters, Michael Burns, Barbara Sammeth) The lady's companion (Stevens) to a wealthy widow (Winters) brings her teenaged brother (Burns) and sister (Sammeth), a pair of recently released mental patients from Toronto, into her employer's Vancouver home. Girard, a veteran American television director, used a gated Shaughnessy mansion as the primary location for this Columbia Pictures release, the first of his two shot-in-B.C. features.

THAT COLD DAY IN THE PARK (1969; Robert Altman; based on the 1965 novel by Peter Miles) with Sandy Dennis, Michael Burns, Susanne Benton. A lonely, delusional spinster (Dennis) brings an umbrella to a young drifter (Burns) in Kitsilano's Tatlow Park. She then offers him shelter in her Killarney Manor luxury apartment. Set, as well as shot in Vancouver, this was the first of director Altman's two filmed-in-B.C. features.

THE KEEPER (1976; Tom Drake) with Christopher Lee, Tell Schrieber, Sally Grey, Ian Tracey. It's hard to tell the patients from the administrator (Lee) of the Underwood Asylum in director Drake's tongue-in-cheek look at institutional bedlam. With no record of a theatrical release, this independently-made Vancouver feature was thought lost for many years. It eventually made it to television in the mid-1980s, with a 1987 release on videotape as a "cult classic."

MR. PATMAN (1980; John Guillermin) with James Coburn, Kate Nelligan, Fionnula Flanagan. Insanity proves contagious for a Vancouver psychiatric asylum orderly (Coburn). An Irish charmer, he identifies too closely with the patients on his ward, an empathy complcated by an affair with a working colleague (Nelligan). Shot on Vancouver locations that included Coquitlam's Riverview Hospital, this Cannon Films release is also known as CROSSOVER.

LOW VISIBILITY (1984; Patricia Gruben) with Larry Lillo, David Peterson, Sue Astley, Marc Diamond, Jerry Wasserman. Found in a state of confusion on a snowy mountain road, an amnesiac (Lillo) is hospitalized. While being treated by a doctor (Wasserman), a police detective (Peterson) investigates the possibility that he may have survived a plane crash by cannibalizing a female companion. Made for $160,000, this first fictional feature directed by  Simon Fraser University film-production instructor Patricia Gruben (who also wrote, produced and edited it), was shot on a Vancouver hospital ward and in Manning Park.

THE STEPFATHER (1987; Joseph Rubin) with Terry O'Quinn, Jill Schoelen, Shelley Hack. "Father knows best — or else" is the shock message in this tale of a domestic disciplinarian (O'Quinn) who marries into, then murders, whole families. On the first of his many visits to B.C., character actor Terry O'Quinn worked on autumnal Vancouver suburban locations dressed to look like neighbouring Seattle.

POSSESSION (1987; Lloyd Simandl, Michael Mazo) with John R. Johnston, Sharlene Martin, Cat Williams. A nurse (Martin) discovers that her intense suitor (Johnston) is the serial killer currently terrorizing the city's young women. A Vancouver mansion and regional woodlots are among the locations used by independent producer Lloyd Simandl in the first of his three directorial collaborations with Michael Mazo. Also known as UNTIL DEATH DO YOU PART.

DEADLY AMBITION (1995; Harvey Frost) with Kelly LeBrock, Wolf Larson, James Brolin. An attractive matron (LeBrock) is trapped in a snowbound chalet with an unhinged weekend guest (Larson). A disgruntled employee of her billionaire husband (Brolin), he makes her the object of unwanted sexual attention. Though Toronto-based television director Frost specialized in family-friendly projects, he attempted R-rated material in this, his second feature film. A Shavik Entertainment project shot in the mountains above Vancouver, it was released on video as TRACKS OF A KILLER.

MALICIOUS (1995; Ian Corson) with Molly Ringwald, Patrick McGaw, John Vernon. Breaking training for an after-hours adventure, a rookie baseball star (McGaw) becomes the obsessive love object of a dangerous, demanding college coed (Ringwald). Molly Ringwald's third working visit to B.C. was her first as an adult actress. This independent U.S. production not only gave her the opportunity to play a psychopath, but to do a semi-nude scene. North Vancouver, West Vancouver and University of B.C. locations stand in in for San Francisco.

NO FEAR (1995; James Foley) with Mark Wahlberg, Reese Witherspoon, Alyssa Milano. Urban tribalism rules when a grunge rocker (Wahlberg) stalks a 16-year-old Seattle girl (Witherspoon), bringing his gang along to lay siege to her parents' seaside home. After establishing shots filmed in Seattle, the production settled into familiar Vancouver locations. Wahlberg follows Witherspoon through the City Square Mall, and they make out during a ride on the Exhibition Park roller coaster. Also known as FEAR, the picture was released by Universal Pictures.

The above is Part 14 of a 20-part restoration of a Greater Vancouver Book article by Michael Walsh originally published in 1997. For additional information on this archived material, please visit my FAQ.