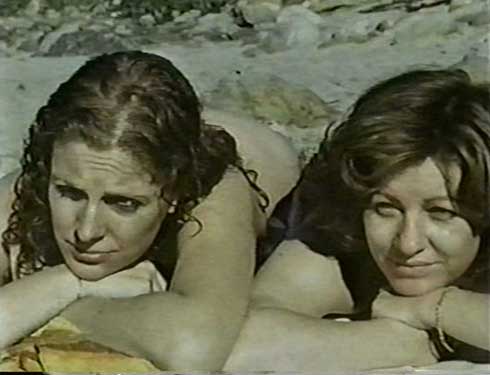 Same-sex lovers Angie (Sara Botsford) and Helen (Patty Duke Astin) enjoy the Vancouver sunshine as they consider the matter of having a baby in director Claude Jutra's By Design (1982).


Romance in the rain forest


In Part 6 of a 20-part series, Reeling Back continues The Greater Vancouver Book's Feature Film Festival, with restored notes on the 11 features in the program called Lovely Couples.

THOUGH VANCOUVER HAS YET to be the subject of a great love song, filmmakers know that romance in all its forms thrives in our rain forest. A variety of meaningful relationships have been played out in front of the cameras, including:

McCABE AND MRS. MILLER (1970; d. Robert Altman; based on the 1959 novel by Edmund Naughton) with Warren Beatty, Julie Christie, Rene Auberjonois. A drifter (Beatty), determined to settle down, becomes enamoured of a frontier madam (Christie). Director Altman's second Vancouver-made feature, a gritty Northwestern, was shot in a mining town that he had built on Vancouver's North Shore. Julie Christie's performance in this Warner Bros. feature earned her a best actress Oscar nomination.

A MAN, A WOMAN AND A BANK (1979; d. Noel Black) with Donald Sutherland, Brooke Adams, Paul Mazursky. Chicago-born Black, remembered as the director of the 1968 cult classic Pretty Poison, shot this caper comedy in photogenic Gastown. In it, two high-tech robbers (Sutherland, Mazursky) are distracted by a local beauty (Adams), a photographer working for the bank they have targeted. Made for AVCO Embassy, it is also known as A VERY BIG WITHDRAWAL.

BY DESIGN (1982; d. Claude Jutra) with Patty Duke Astin, Sara Botsford, Saul Rubinek. Near the end of his career the distinguished Quebec director Jutra was still breaking new ground thematically, with this comic tale of same-sex lovers (Astin, Botsford) who are seeking a man so that they can have a baby. An independent Canadian feature, Jutra's picture makes much of the fact that Vancouver is a peninsular city with the ocean never far away.

COUSINS (1989; d. Joel Schumacher) with Ted Danson, Isabella Rossellini, Sean Young. In a domestic comedy that makes Vancouver look like a lover's paradise, in-laws (Danson, Rossellini) keep romance within the family by pretending to cheat on their unfaithful spouses. In this Paramount Pictures remake of the sophisticated 1975 French romance Cousin cousine, Schumacher makes good use of such locations as Chinatown and North Vancouver's Lonsdale Quay.

IMMEDIATE FAMILY (1989; d. Jonathan Kaplan) with James Woods, Glenn Close, Mary Stuart Masterson. Maternity and married love are examined in this drama about a couple (Woods, Close) who are unable to conceive a child of their own. They agree to care for an unwed, pregnant teen (Masterson) in exchange for her baby. Vancouver locations, including Chinatown and Kits Beach, stand in for Seattle in this Columbia Pictures release.

BULLETPROOF HEART (1994; d. Mark Malone) with Anthony LaPaglia, Mimi Rogers, Matt Craven. An East Coast hitman (LaPaglia) endangers his own life as well as his professional standing when he falls in love with the woman (Rogers) he's been hired to kill. An independent production released in the U.S. as KILLER, it used such industrial locations as the Versatile Pacific Shipyards to add gritty atmosphere.

TOKYO COWBOY (1995; d. Kathy Garneau) with Hiromoto Ida, Christianne Hirt, Janne Mortil. This cultural re-adjustment comedy tells the story of a young Japanese (Ida) who arrives in Vancouver hoping to fulfil his Western fantasies. He discovers that his dream girl (Hirt) is living with a dream girl (Mortil) of her own. An independent Canadian feature, it was shot in Vancouver and the wide-open spaces of Merritt, B.C.

The above is Part 6 of a 20-part restoration of a Greater Vancouver Book article by Michael Walsh originally published in 1997. For additional information on this archived material, please visit my FAQ.