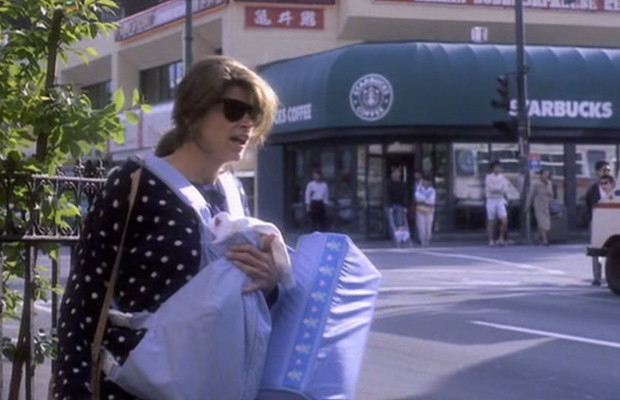 On location in Vancouver's West End, Kirstie Alley considers a stop for coffee in Look Who's Talking (1989).


Spawning sequels, and even series


In Part 9 of a 20-part series, Reeling Back continues The Greater Vancouver Book's Feature Film Festival, with restored notes on the 14 features in the program called Encore II.


FEATURE FILMS MADE IN VANCOUVER
Prepared for Chuck Davis and The Greater Vancouver Book — June, 1995
[Published in 1997 by The Linkman Press]
By MICHAEL WALSH
[PART 9: ENCORE II]

THIS IS YOUR PROGRAM guide to a series of 20 movie retrospectives. Together, they include all of the theatrical feature films made in Vancouver and in release as of June, 1995. (Our current program does not include the made-for-TV pictures.) Though we've tried to be as complete as possible, we've almost certainly missed a few. If you know of any, please let us know. [Readers of this website who wish to get in touch with additions or corrections can reach me by using the Reeling Back Contact Me button.]
Notes on each picture include its title (and any alternate titles), its year of release, the director, leading players and a brief description.
Our show continues with . . .

DID WE MENTION THAT successful films with Vancouver origins have produced sequels? These include:

THE NEVERENDING STORY (1984; d. Wolfgang Petersen; based on Michael Ende's 1979 novel Die unendlich Geschichte) with Noah Hathaway, Barret Oliver, Tami Stronach. A lonely child (Oliver) takes refuge from schoolyard bullies in an antiquarian bookstore, where he discovers a portal to a fantasy universe in which a young warrior (Hathaway) battles an evil force to save the kingdom of the Childlike Empress (Stronich). Though the imaginary world of Fantasia exists only on a Bavarian Studios sound stage, the big-budget German film's "real" world sequences featuring Oliver were shot in Gastown. The producers of this Warner Brothers release returned to Vancouver for . . .

THE NEVERENDING STORY II: THE NEXT CHAPTER (1990; d. George Miller) with Jonathan Brandis, Kenny Morrison, Alexandra Johnes, Clarissa Burt. Six years on, a new cast of kids was needed to carry on the story. Based on the second half of Ende's book, the Childlike Empress (Johnes) summons its bookish hero (Brandis) back to Fantasia to help her warrior (Morrison) battle an evil sorceress (Burt). Five years later, the filmmakers returned again for . . .

THE NEVERENDING STORY III: ESCAPE FROM FANTASIA (1995; d. Peter MacDonald) with Jason James Richter, Melody Kay, Jack Black, Freddie Jones. The now-teenaged hero (Richter) is joined by his younger stepsister (Kay) in a final adventure. Though not based on Ende's novel, it features even more of its "real" world, shot on Vancouver locations.

MY AMERICAN COUSIN (1985; w/d. Sandy Wilson) with Margaret Langrick, John Wildman, Richard Donat. Vancouver writer-director Wilson's prize-winning tale of an Okanagan 12-year-old (Langrick) coming of age in the 1950s was shot on location in Penticton, B.C. An independent Canadian feature, it was followed by . . .

AMERICAN BOYFRIENDS (1989; w/d. Sandy Wilson) with Margaret Langrick, John Wildman, Jason Blicker. At 17, the SFU freshman (Langrick) cuts classes to attend her American cousin's wedding in Oregon.  Classroom scenes were filmed at the mountaintop university.
EMPIRE OF ASH II (1987; d. Michael Mazo, Lloyd Simandl) with Melanie Kilgour, Thom Schioler, Frank Wilson. Flouting convention, Vancouver independent producer Simandl started his series of post-holocaust adventures with the second chapter. The story of a female road warrior (Kilgour) seeking to save her sister from fanatical survivalists, it was shot on the coastal forest in and around Squamish. Also known as MANIAC WARRIORS, it was soon followed by . . .

EMPIRE OF ASH III (1988; d. Michael Mazo, Lloyd Simandl) with William Smith, Ken Farmer, Melanie Kilgour. Filmed in the Abbotsford area of the Fraser Valley, the battle continues as an insane religious warlord goes on the attack against the no-nonsense blonde heroine (Kilgour). Also known as LAST OF THE WARRIORS.

STAKEOUT (1987; d. John Badham) with Richard Dreyfuss, Emilio Estevez, Madeleine Stowe. The B.C. Penitentiary, Granville Island and the Campbell Avenue Fisherman's Wharf are among the distinctive locations used in this comedy-thriller about Seattle cops (Dreyfuss, Estevez) on surveillance duty. Touchstone Pictures asked for another, so they returned for . . .

LOOK WHO'S TALKING (1989: d. Amy Heckerling) with John Travolta, Kirstie Alley, George Segal. Downtown Vancouver doubled for Manhattan in this quirky courtship comedy. Cutely narrated by the infant son (voice of Bruce Willis) of a single mom (Alley). The story involved her coming to accept a new man (Travolta) in her life. It was a success for Tri-Star Pictures, so the chatter continued in . . .

LOOK WHO'S TALKING TOO (1990: d. Amy Heckerling) with John Travolta, Kirstie Alley, Olympia Dukakis. With two infants to handle the narration (voiced by Bruce Willis and Roseanne Barr), the young marrieds (Travolta, Alley) experience separation and a reconciliation that results in . . .

LOOK WHO'S TALKING NOW (1993: d. Tom Ropelewski) with John Travolta, Kirstie Alley, Olympia Dukakis. With the children old enough to speak for themselves, the family's bantering dogs (voices of Danny DeVito and Diane Keaton), report on a marital crisis that ends on Christmas Eve in a blizzard filmed on Bowen Island.

SKI SCHOOL II (1995; d. David Mitchell) with Dean Cameron, Heather Campbell. Whistler provided the setting for another comic tale of athlete irresponsibility. In this one, a former ski coach (Cameron) plots to prevent his ex-girlfriend (Campbell) from marrying an opportunistic rich guy.

The above is Part 9 of a 20-part restoration of a Greater Vancouver Book article by Michael Walsh originally published in 1997. For additional information on this archived material, please visit my FAQ.